Inspector (retired) William Diggs takes us on a trip down memory lane. Inspector Diggs joined the Fire and Rescue NSW in 1930, and at the age of 98 has the honour of being our oldest surviving senior officer.

On my first day I was taken in a truck to No 22 Station, Leichhardt where I remained for seven years. The truck driver said, “I have seen you before,” and I said, “When you played Rugby League for Dubbo!” What a small world. 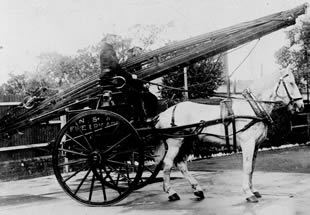 On my first day on duty we were ordered out to a huge fire in a paint factory on the Parramatta River, and the fire spread so quickly that one motor had to be driven into the river to save it being burned. It had to be pulled out the following day.

Although we were not dismissed until 10:00pm, no overtime was paid and no refreshments provided. The Fire and Rescue NSW also had the option of keeping the off-going platoon on duty if a fire was in progress, and again, there was no overtime. The organisation had the best of conditions on its side because of the crowds looking for work. Politicians generally had no interest in our welfare; our numbers being so small. I think 530 was the number on my tunic when I joined.

Firefighters fought every inch of the way for better conditions and a shorter working week until the Premier Mr W McKell came to power. The Premier told the Chairman of the Industrial Commission to get us before the court and give us a decent living standard. This is when the 56 hour 3 platoon system came into operation. After further intervention from a Labour Premier, we were awarded the 40 hour week.

When the platoon system came into operation in 1928, training staff to change from horse power to motor was problematic, and when I joined in 1930, the standard of driver left a lot to be desired. The fact that I had a driver’s licence and experience driving a Fordson Tractor on the farm was very much in my favour. When three different sized motors needed loading on a flat top rail truck to go to Albury for the volunteer fire demonstration, I succeeded in doing it. 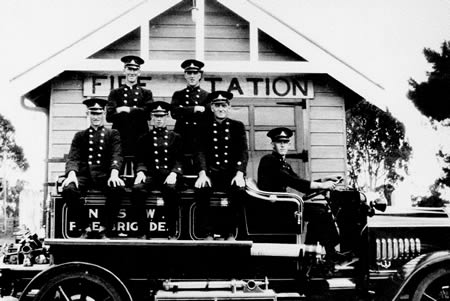 Communications have also undergone big changes. Right up until the wireless was introduced the officer at a fire would say, “send this message” or “send a stop,” and a firefighter would search for telephone wires leading to a house and ask the occupants for use of their phone. This was even more difficult, because unlike today, very few homes had telephones connected.

For many years the Fire and Rescue NSW was responsible for the maintenance of firefighting equipment at Callan Park Mental hospital. One week a firefighter would go from Rozelle and the next from Leichhardt with cleaning gear in one bag and lunch in a little Gladstone bag and sped the whole day there. The matron at the women’s ward where we also gave the staff drill told us the patients would knit us jumpers if we supplied the wool and a few took advantage of the offer.

Every station had a bicycle on the inventory, mainly to test those wretched street fire alarms which may have been the best on offer at the time but in fact were an open invitation for some people to send in false alarms. Bankstown had an officer and two firefighters on each platoon and several volunteers. The alarms had to be tested each week. A test by motor vehicle proved the distance to be 60 miles. The two firefighters would each test half, one in the morning and the other in the afternoon.

Leichhardt had two Dennis Motors (one being a spare) in 1913 and one pumped for six weeks continuously at the big wool store fire at Pyrmont to build up the hydrant pressure as the wool was taken to Long Bay to be processed for final baling. It was taken to the Fire and Rescue NSW workshop and found in perfect working order. There, motors were fitted with rotary two stage back-to-back Gwynne pumps.

At Pyrmont, the Ahrens Fox motor pumped for 27 hours straight through 3 ¾” inch hose. The twin triple bucket and plunger pumps caused terrific friction and gave the impression of being inferior to the rotary pumps.

At one time, when No 79 motor was in the workshops to be checked, the pump was dismantled and they found a piece of wood in it that had been there all those years, the officer was taken in to see it before it was removed.

When I first went to Leichhardt in 1930, Station Officer F J Smith offered me some advice, which I was very pleased to accept: “Always depend on your own judgment, never let politics or religion change your mind. Judge every person as you find them and not as anyone else may say”. As an officer I adhered to that advice and will for ever be thankful to that fine old man.