The Metropolitan Fire Brigade (MFB), the precursor to the Fire and Rescue NSW, was established on 14 February 1884. MFB headquarters was operating from the old Insurance Brigade Headquarters in Bathurst Street, and there was a pressing demand for a new central fire station. In July 1884 the Government purchased a site on the western side of Castlereagh Street for the sum of £10,000, and in 1888 the new station was completed.

All fire stations were given a number as they were built, starting with Headquarters or No 1, but City of Sydney was not actually the first fire station built for the MFB, the honour going to Marrickville which was opened in 1886.

The design, by the Colonial Architect’s Department, was considered innovative for its time, and included features drawn from the experiences of the London Metropolitan Fire Brigade. As a result station remains a rare example of Victorian free classical architecture. The original building was erected with a large courtyard to the rear, creating two multi-storey wings, each of which was fitted with external metal balconies.

A small stables building was located in the rear courtyard, behind the three main engine bays which had direct access to the street. The harness and the sway bars for the horses were suspended over each horse by means of weights running into tubes, which tripped themselves when the collar was snapped to, and the horses went into the engine bay.

A watchroom was located on the northern side of the ground floor and telephone exchange board, fire alarms and electrical apparatus were operated from there. The electrical contact in the room, when pulled, rang the bells throughout the entire building, turned up the gas lamps in the engine bay, released the stable doors (which immediately flew open by means of springs), and released a weight situated in the single men’s quarters on the first floor which opened two flaps to enable firefighters to slide down a pole. The original switchboard has been restored and is on display in a replica of the watchroom at the Museum of Fire, Penrith.

In 1893, the station’s workshops were enlarged and this was the first of many alterations and additions to take place at Headquarters.

An adjacent brick warehouse at 211 Castlereagh Street (known as the Boot Factory) was leased by the Fire Brigades in 1902 and was used to manufacture items such as canvas, rope lines, uniforms and boots. The property was purchased in 1923, and the interior converted for a gymnasium, carpentry shop, workshops and dormitory.

In 1907, the original building was extended along Castlereagh Street to the north. The new four storey buildings were originally used for administrative purposes and accommodation. In 1928 an enlarged fleet of motorised appliances necessitated the ground floor’s conversion into two engine bays, and the Boardroom and offices were relocated to the first floor. 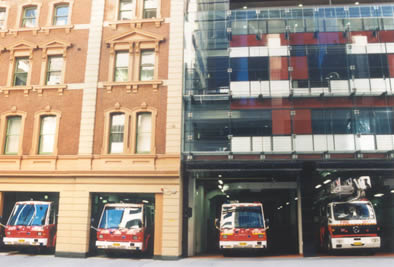 The need for a new and enlarged fire station was identified as early as 1934, yet, despite the submission of numerous proposals, the project was not progressed. In July 1999, an application was lodged with City of Sydney Council for works comprising refurbishment, adaptive reuse and new accommodation. This proposal saw the retention of the 1887 building together with the façade, engine bays, front rooms and main staircase of the 1907 additions. It also included the construction of a new building incorporating purpose built engine bays and state of the art firefighter’s facilities. The foundation stone was laid by the Minister for Emergency Services, Bob Debus and Fire and Rescue NSW’s Commissioner Ian Mac Dougall AC AFSM.

Construction of the new station was completed in February 2003. Restoration of the 1887 building commenced in March 2003.