At the launch, a large mural with the theme of fire safety was unveiled, after a statewide art competition for children held last year.

Commissioner Mullins said it was important that fire safety messages reached all parts of the community, including Aboriginal Australians.

"The Aboriginal Fire Safety campaign carries the same messages we tell the broader community – for example, maintaining your smoke alarms and taking care with candles and cigarettes – but in a way that will appeal to Aboriginal people," Commissioner Mullins said.

The Commissioner added that he hoped Aboriginal people will connect with the campaign, which was developed in consultation with Aboriginal organisations including the TAFE Eora Centre, the Metropolitan Local Aboriginal Land Council, and the Redfern Aboriginal Housing Company.

"The 'Protect Your Mob' poster is an iconic image with a proud Aboriginal firefighter in front of the Tony Mundine Gym in Redfern, and the brochures feature Aboriginal first-grade NRL players Chris Sandow, Nathan Merritt, and Ben Lowe," Commissioner Mullins said.

The new mural on the northern wall of Redfern Fire Station was unveiled, showing the four colourful artworks that were chosen from 160 entries in the statewide art competition. The judges included representatives from local Aboriginal organisations.

The winners, aged between nine and 13 years, live in the towns of Lambton and West Wallsend near Newcastle, and in the Sydney suburb of Fairfield. Two of the winners are Aboriginal. Each of the four winners received a digital camera package for their efforts.

"This art competition was the first of its kind for Fire and Rescue NSW, and a very fitting contribution to Reconciliation Week," Commissioner Mullins said.

"These colourful artworks were chosen because of the engaging way they present important fire safety messages of 'stop, drop and roll', 'everyone needs a home escape plan', 'call triple zero', and 'don't smoke in bed'.

"It was a wonderful moment for the local community when we unveiled the mural. A local artist enlarged the childrens' A4-sized artworks to boards that were over three-metres long. Put together they form a mural that is 13 metres in total length. It was a very proud moment for the children as well, seeing their work now part of the urban landscape of Redfern." 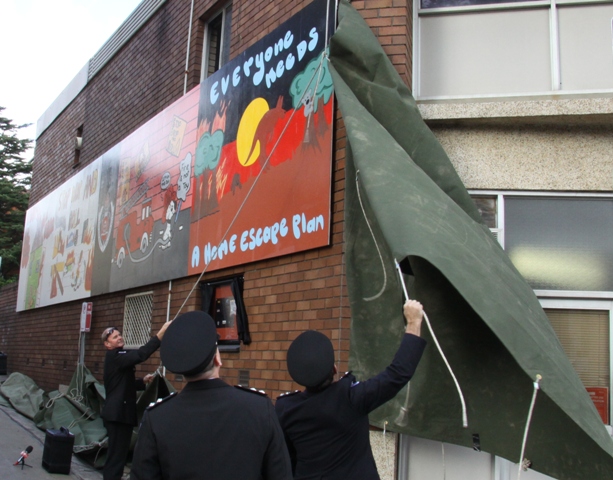 More photos of the mural and today’s unveiling are available by contacting FRNSW Media and Public Affairs Unit. The “Protect your Mob” poster is also available from our Indigenous Portal.