School principal to be recommended for Commissioner's Commendation 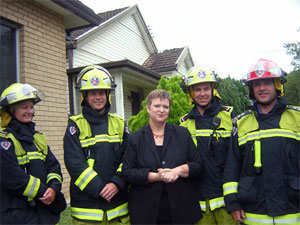 A primary school principal will be recommended for a NSW Fire Brigades (NSWFB) Commissioner's Commendation after rescuing a woman from a burning house on 1 February 2007.

Athelstane Primary School Principal Chris Johnson twice entered a fully alight home across from the school at Arncliffe - first to rescue resident Todora Grasesvki, and then to check if there were any other occupants.

"Her quick thinking saved the life of the elderly occupant, and therefore I am recommending Miss Johnson to the Commissioner of the NSW Fire Brigades for a Commissioner's Commendation in recognition of her bravery," he said.

NSWFB crews from Arncliffe and Kogarah fire stations ontained the fire to the lounge room where it started, while paramedics treated the two women for minor injuries. Both women, who had suffered from smoke inhalation, were taken to St George Hospital for observation and were later released.