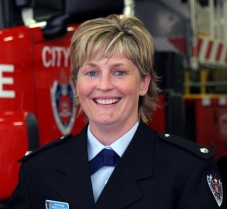 Superintendent Picken said Captain Hatton was a great firefighter and an excellent leader, who has been Deputy Captain for the past two years.

"Michelle joined the NSWFB as a retained, or on-call, firefighter about six years ago and quickly made her mark on the team and the organisation.

"She is highly respected by her fellow firefighters and other senior officers and has always been proactive in promoting fire safety messages, recruitment and has been the primary instigator in the installation of Community Fire Units in the Mittagong area."

"Michelle is the first female firefighter to be appointed to the position of Captain in the Southern Highlands, which is a fantastic achievement.

"I hope that Michelle’s success encourages more women from the local community to become a retained, or full time, firefighter."

Captain Hatton said she was excited about her new position and looked forward to the new challenges it brought with it.

"I fulfilled a life-long dream when I became a firefighter so it is a real honour to be appointed to the position of Captain," Captain Hatton said.

For further information about becoming a NSWFB retained firefighter, contact the Zone Administration Office on 02 4822 9395 or visit www.fire.nsw.gov.au