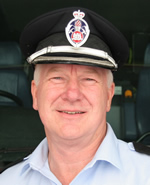 The award, announced by the Governor-General, is the highest for a firefighter in Australia and acknowledges outstanding service.

"Superintendent Bedford regularly represents the NSWFB on multi-agency teams responsible for the planning and coordination of major high-profile events hosted in NSW including the Sydney Olympics, APEC and the upcoming World Youth Day. He is also an expert in dealing with the consequences of terrorist attacks.

"Through his experience, expertise and professionalism, Superintendent Bedford has made a major contribution to the NSWFB over a distinguished career spanning almost 30 years."

Superintendent Bedford became a firefighter in March 1979 and worked at fire stations across Sydney as well as specialist sections such as Communications, the Fire Safety Division, and as Manager of the Hazardous Materials Response Unit.

In 1998 he was seconded to the role of Olympic Liaison Officer for the NSWFB where he successfully co-ordinated the NSWFB's emergency strategies as part of the NSW Police Olympic Planning Group, and in 2003 took responsibility for the continued development and planning of the NSWFB's role and capabilities in dealing with the aftermath of terrorist attacks. He managed the NSWFB's preparations for the Asia Pacific Economic Communities (APEC) event and is now coordinating planning for fire protection for World Youth Day 2008 in Sydney.

Superintendent Bedford said, "Receiving this award is an unexpected surprise, but at the same time it's very flattering to be recognised in this way.  I am so proud to be part of the NSWFB - a team that works tirelessly to protect the community."