Commissioner Greg Mullins today welcomed 20 new recruits to the NSW Fire Brigades (NSWFB) during a graduation ceremony which also saw 28 firefighters commended for their actions during a civil disturbance in 2004.

The graduates have completed the NSWFB's 16 week training course and have already seen action after being drafted in to help fight the Oxford Falls bushfire earlier this month.

The graduates come from a variety of backgrounds.  Five used to work in the electrical industry and two were school teachers.  There is a baker, a call centre manager, a motorcycle instructor and even a former professional diver.

Commissioner Mullins said that the latest graduates to join the NSWFB would be deployed to stations across Sydney.

"Throughout their careers they will assist the community in a range of emergency situations, from fighting building, bush and grass fires to dealing with hazardous chemical spills, gas leaks and rescuing people from car and industrial accidents.

"The new firefighters will also have a role in educating sectors of the community about fire safety and other emergency areas such as road safety education for young adults."

Following the recruit graduation ceremony, which was held at the NSWFB Training College in Alexandria, 28 firefighters received commendations for their actions during the civil disturbance in Redfern in 2004.

Senior Firefighter Richard Lucas was awarded a Commendation for Courageous Action for going to the rescue of injured police officers without any thought for his own safety. 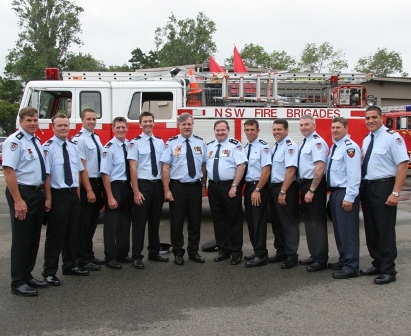 NSWFB's Commissioner Greg Mullins said the firefighters acted in the finest traditions of the service.

"Despite the difficult circumstances the firefighters carried out their job, not only extinguishing various fires and saving Redfern Railway Station from burning down but also rescuing and treating injured police officers."

The graduate fire officers will take up positions at the following fire stations:

The current class of recruits raised over $4,260 for Westmead Children's Hospital Burns Unit and the money will be donated to the hospital during today's graduation ceremony.