NSW residents urged to be vigilant about fire safety this winter 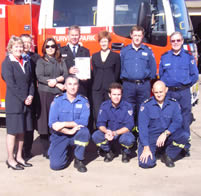 The NSW Fire Brigades (NSWFB) and insurer AAMI are urging NSW residents to take safety precautions to prevent a potentially fatal fire in the home this winter.

As part of their commitment to ensuring community awareness of home fire protection, the two organisations have formed a partnership to produce seasonal fire safety calendars.

NSWFB Commissioner Greg Mullins said winter was the most dangerous time for home fires with 1328 fires occurring between 1 June and 31 August 2006, which represented 30 per cent of the 4433 home fires in 2006.

“We never want to see a repeat of the tragic winter of 2005 when 13 people, including seven children, died in home fires in just over two weeks,” Commissioner Mullins said.

“Simple precautions such as having a suitable number of smoke alarms, developing and rehearsing a home escape plan, supervising cooking, using heaters and fires carefully, cleaning the clothes dryer lint filter and checking electric blankets for damage can help prevent a fire this winter,” he said.

AAMI NSW Corporate Affairs Manager Selina O’Connor said a review of AAMI claims data over the past five years showed that across NSW most fire claims were made in July, June and December.

“An alarming one in five (21%) Riverina residents believes their home is a fire risk, yet almost three in 10 (27%) do not have a home fire escape plan in place, putting themselves at greater risk, according to a survey by leading car and home insurer AAMI,” Ms O’Connor said.

“It is good to see that three quarters (75%) of Riverina residents recognise that they need more fire safety equipment, however it is not so good that they aren’t acting to prevent fire risk.

“Riverina residents are the most likely not to have fire safety equipment, and are least likely to leave keys in deadlocks.

“The next step is to put some time aside to investigate and then purchase the equipment needed to protect their homes,” said Ms O’Connor.

Printed copies of the calendar can be obtained from NSWFB fire stations and AAMI offices.