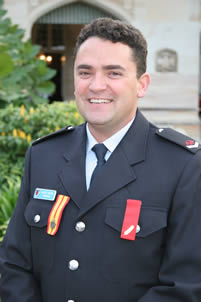 The Governor of NSW, Professor Marie Bashir AC, presented Firefighter Taylor, of West Wollongong, with the award for his actions at a boat fire on 1 January 2005.

Commissioner Mullins said Firefighter Taylor was off duty with family members on Lake Conjola when a fire broke out on board their pleasure craft on New Year’s Day 2005.

“Firefighter Taylor assisted members of his family off the boat so they could swim to shore, and while doing so, his clothes caught alight.

“He jumped into the lake to extinguish the flames and then returned to the boat to rescue his nephew, who had also suffered burns.

“When he reached the shore, Firefighter Taylor ignored his own burns to assist in the treatment of his injured family members until the Ambulance Service arrived and the injured people, including Firefighter Taylor, were flown to Concord and Westmead Burns Units for specialist treatment.

“Firefighter Taylor put the safety of others above his own, and he is a credit to his family, the NSW Fire Brigades and the community,” Commissioner Mullins said.

Firefighter Taylor was also recognised for his actions at this incident with a NSWFB Commendation for Courageous Action on 29 March 2007.