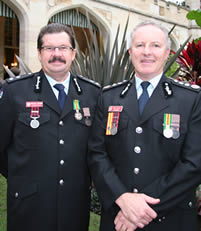 The Governor of NSW, Professor Marie Bashir AC, will present Supt Guymer with the AFSM at an investiture ceremony at Government House at 3pm today.

“Supt Guymer, the Commander of the Sydney East zone, is a worthy recipient of this award, given his dedication and exemplary service to the community and the NSWFB,” Commissioner Mullins.

“In particular, he has played a key role in managing the planning and preparedness of the NSWFB mass casualty, terrorism-related or civil disturbance emergencies in the central business district of Sydney.

“It is fire officers like Superintendent Guymer who help to ensure community confidence in the fire services is high,” Commissioner Mullins said.

Superintendent Guymer, of San Souci, joined the NSWFB on 10 November 1978 and for the past 28 years has provided dedicated service to the people of NSW through the NSWFB, holding a variety of operational and managerial positions.

During the 1980s he served at a number of specialist rescue stations including Parramatta, Blacktown and Stanmore. In 1996, he was appointed to the position of Principal Training Officer where he helped to modernise the NSWFB approach to skills training.