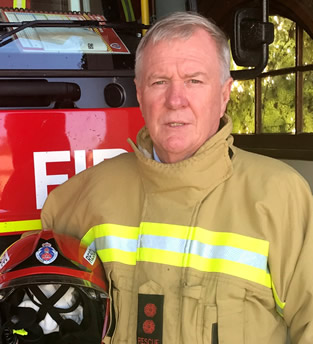 A retained, or on-call, firefighter with FRNSW for nearly 40 years, Captain Clarke has been awarded the Australian Fire Service Medal (AFSM).

The AFSM is the highest honour an Australian firefighter can receive and Captain Clarke is one of three FRNSW firefighters awarded the prestigious medal in today’s honours.

“Captain Clarke joined the Forbes brigade in June 1978 and has held leadership positions since being promoted to deputy captain in 1996 and then captain in 2001,” he said.

“He is a highly-regarded leader in the emergency services field and his strong leadership and management skills are reflected in his dedicated, committed and skilled team of retained firefighters.

“Captain Clarke has played an integral role in mentoring his firefighters with a number progressing to full-time careers within FRNSW.

“He not only leads FRNSW’s emergency response and recovery operations in a wide, diverse regional community but also actively engages with school children and seniors on fire safety.

“Captain Clarke has served FRNSW and the people of Forbes and surrounding communities with pride and distinction for nearly 40 years.

“He is a worthy recipient of the AFSM.”

Captain Clarke will be presented with his AFSM at a ceremony later in the year.