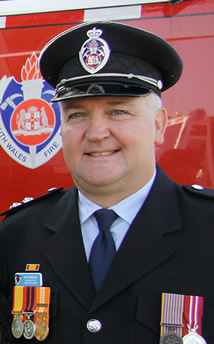 Lismore Station Officer Ian Grimwood, who has served with FRNSW for more than 24 years, has been awarded the Australian Fire Service Medal (AFSM).

The AFSM is the highest honour an Australian firefighter can receive and Station Officer Grimwood is one of three FRNSW firefighters awarded the prestigious medal in today’s honours.

“He has worked closely with local firefighters in the area, mentoring and providing advice in highly complex areas, including hazardous materials response and recovery.

“The dedicated firefighter has served local communities through not only leading emergency response and recovery but also educating residents about fire safety and prevention.”

Station Officer Grimwood has previously been awarded a Commissioner's Unit Commendation for his support of the Northern Rivers’ Repco Rally Australia Championships in 2009, and a Commissioner's Individual Commendation in 2008 for his work in researching and recording the achievements of firefighters in theatres of war and other conflicts.

“He has displayed distinguished service of the highest order and is a worthy recipient of this Australia Day honour,” he said.

Station Officer Grimwood will be presented with his AFSM at a ceremony later in the year.