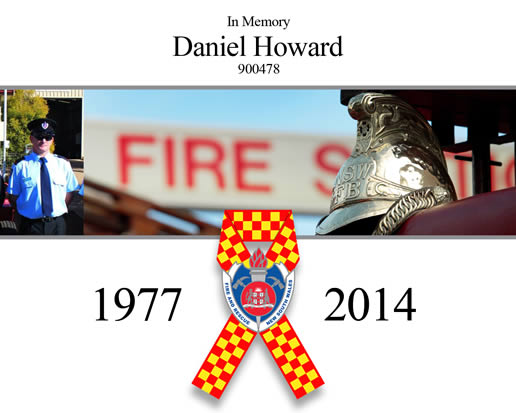 The funeral service for Firefighter Daniel Howard, who was killed in the line of duty in Cobar on 17 August, will be held at 2pm today.

Wherever you are today, you may wish to read the prayer below and observe a minute’s silence at 2pm as a mark of respect for Daniel.

“Almighty God, in our sorrow and uncertainty, we ask for you to help us understand our loss and know that no matter how dark the feeling we experience, you offer us your love and support. Bless all those who are heartbroken by the current tragedy and help us to find hope and strength for the days ahead. Amen.”

Leave a message in our Condolence book

The public and the wider national and international firefighting community have been deeply saddened by the tragic death of Firefighter Daniel Howard while on duty at a fire in Cobar on Sunday 17 August.

Fire & Rescue NSW is inviting people to leave condolences that will be presented to Daniel's family in a tribute to honour his memory.

Every day, firefighters put their lives on the line to protect others. They do this when they fight fires, when they deal with dangerous chemical spills, and when they rescue people from car accidents and burning or collapsed buildings. Firefighters face danger so that they can save the lives of others. That’s why the community holds them in such high esteem, and why people often call them heroes.

Today, sadly, we’re all here to say farewell to one of those heroes: Retained Firefighter Daniel “Howie” Howard.

On Sunday just over a week ago, Daniel responded to a fire call at a Cobar landmark, the New Occidental Hotel.

As he had done countless times before, he jumped into his car when he was alerted and dropped everything to respond to a call for help. He rang Jenna to ask her to meet him at the fire with his gear, then together with his fellow firefighters immediately started evacuating people away from danger. He and his mates from 256 Station Cobar were heeding the call to protect life, property, and the environment, a calling they had all dedicated themselves to. Whilst it isn’t something that firefighters talk openly about, it is always in the back of their minds that what they do is inherently dangerous, and there is a tacit understanding that each call out could be their last. After all, firefighters run into situations that everyone else run away from. And so it was on Sunday the 17th of August 2014 - Daniel and his mates from 256, as always, were prepared to do whatever needed to be done to save others. It takes very special people to do something like that, and clearly, Daniel Howard was a very special person.

As it turned out, the fire was the biggest that Cobar had seen for many years. It had all of the ingredients that firefighters dread – the possibility of people trapped, requiring firefighters to enter the building, a rapidly deteriorating situation that quickly made conditions untenable, and because of the speed and intensity of the fire in the old structure, the danger of structural collapse. Where most calls turn out to be fairly routine, this fire proved to be anything but routine.

Just an hour into the desperate firefighting operation, tragedy struck. Firefighters and members of the public who had amassed to watch the spectacle reported hearing a loud explosion. Mercifully, I think that this would have been the last thing that registered with Daniel – the front wall and awning collapsed, burying him and a colleague. As I indicated to Daniel’s family, I believe that this was the last moment of Daniel’s life. I’m quite sure after speaking to those on scene that he didn’t suffer.

I also know that help was on hand immediately. Local RFS volunteers and members of the Fire & Rescue crew sprang into action, removing one of the firefighters from danger so that his injuries could be tended to, and digging Daniel from beneath the rubble. They commenced immediate resuscitation efforts and waiting Paramedics ran to assist. Everything that could have been done for Daniel was done, however his injuries proved to be too great.

This is one of those fateful events that everyone will remember exactly where they were and what they were doing when they learned of the tragedy. I was at Leura after a retirement function for a fire Captain the night before. I immediately set out for Cobar so that I could be there to support Daniel’s crew mates and family. On the way, I stopped at Dubbo Fire Station and saw Captain Brad Lennon who was travelling back to Cobar from Sydney. Of course he was devastated.

When I arrived in Cobar, Jenna and the crew were in shock. And of course, why wouldn’t they be? They had lost an adored partner, a great mate, a local character, and an admired professional colleague. I said before that Daniel was given the best possible chance of survival. Whilst the fire crew and local paramedics were numb with shock later that day and into the night, this was not the case at the fire. Despite seeing 2 mates consumed by a falling wall, and despite the obvious danger to themselves, Cobar’s emergency service members swung into action immediately. In his last moments Daniel was surrounded by mates – mates who did everything possible in a desperate bid to save him. But despite these efforts, it was not to be. I’m immensely proud of their efforts.

Sadly, now all that we can do is reflect on the type of person Daniel was, and give thanks for having had the privilege of knowing and working with him.

I personally had the privilege of meeting Daniel some time ago on a visit to Cobar Fire Station, and it was clear to me then that he was a vital part of the team. Of course he was also a respected business owner, and a lifelong member of the Camels footy club. The huge turnout today says a lot about the man. He was a mate, a professional colleague, a partner, a son, and a brother. Lots of things to lots of different people. He packed all of this into a life that has unfortunately been cut short, but obviously, he touched many, many lives. Indeed, when I was in Cobar for a few days immediately following the accident, many people spontaneously came up to me and expressed their sorrow at Daniel’s passing. They all said the same thing – that Daniel was a great bloke, and that they can’t believe that he is gone.

Because I didn’t have the privilege of knowing Daniel as well as most of you though, what I want to do today is to talk briefly about one particular facet of his rich and busy life. To pay tribute to a man who had dedicated himself to the saving of life and property; someone who would never back off even if he was in personal danger.

Daniel was a member of Fire & Rescue NSW for 5 years, and served the Cobar Fire Brigade and his local community with distinction. It’s anybody’s guess how many people he helped over the years in their hour of need, but the community owes him a huge debt of gratitude. Being an emergency worker, whether a firefighter, Police officer, Ambulance officer, RFS, SES or VRA volunteer, is a big responsibility, and sometimes, as we’ve seen, it involves personal danger. But of course it also brings great satisfaction in
being able to help others. Emergency workers are of course ordinary men and women; but on a daily basis they do extraordinary things simply so that they can help others – usually people they have never met. Retained Firefighter Daniel Howard was one of those extraordinary people. He was also a member of our extended emergency services family – as evidenced by the attendance today of personnel from all of our emergency services in NSW, our Minister for Police and Emergency Services, and representatives from interstate fire services. All of us feel his loss keenly because to us he was family.

To Daniel’s extended family, particularly his partner Jenna, his Mum and Dad Genevieve and Jeff, sisters Heidi and Natasha, of course our grief can’t come close to what you are going through right now. On behalf of all firefighters and emergency services members I extend to you our deepest, deepest sympathy for your unspeakable loss – and be assured that we will always be there for you when you need us.

The number of people here today, including his workmates, team mates, friends, neighbours and family, politicians, representatives of all of the state’s emergency services and interstate fire services, is testimony not only to the popularity of Daniel Howard, and the high esteem in which he is held, but also to the high esteem in which the community holds firefighters generally. I know that the community grieves with the Howard family and with Fire & Rescue NSW, because they find it hard to come to terms with the fact that one of their protectors has paid the ultimate price as he tried to keep them safe. So today’s outpouring of grief and admiration is a fitting tribute to a man who was dedicated to his family and to protecting and serving the community. A true local hero in every sense of the word.

Retained Firefighter Daniel “Howie” Howard, it is with much sadness that we all have to say goodbye to you today. On behalf of all of the emergency services, and in particular your second family, Fire & Rescue NSW, I say a fond farewell, a heartfelt thank you, and I salute you for your bravery and commitment.

May you rest in peace.